Biography in progress: John Glashan was born in Glasgow in 1927. He was educated at Woodside School and studied drawing and painting at the Glasgow School of Art. He moved to London in the 1950's and began as a portrait painter, supplementing this with cartoon work. His interest in humour and cartooning began early on, as a student he contributed cartoons to student magazines. Some of his first cartoons appeared in Punch magazine in the 1950s and in Lilliput from 1959, followed by regular features in Queen magazine and Private Eye from 1961. He was one of the founder members of the British Cartoonist's Association in 1966.

In 1978 he took over from Jules Feiffer on The Observer magazine and began his strip cartoon Genius featuring Anode Enzyme, Genius (IQ 12, 794) and his patron Lord Doberman, the richest man in the world. It ran for 228 episodes until 1983 and won him the Glen Grant Strip Cartoon award in 1981.

From the 1960's to 1990's John contributed to many magazines and newspapers including Harpers & Queen, The New Yorker, The Spectator, Town and Country, Tatler, Radio Times, The Observer and The Sunday Times. The longest running was his weekly cartoon for The Spectator from 1988 to 1998, printed in half page colour. He continued to paint throughout this time and his cartoons became painterly in quality. Exhibitions of his paintings and cartoons were held at The Francis Kyle Gallery in 1979 and 1983, The Cartoon Gallery in 1991, The Fine Arts Society in 1991 and 1994 and at the Grosvenor Gallery in 1995.

He illustrated several books including Tonight and Other Nights, Sweet & Sour, Small Parts in History and Journal of a collector, and collections of his work were published in The Eye of the Needle, Speak up you Tiny Fool, The Penguin John Glashan and John Glashan's World.

John's cartoon characters ranged from tramps to millionaires to inventors, often tiny figures drawn against a wonderful backdrop of architecture, interiors, beautiful landscapes and ingenious inventions. His unique style evolved from black pen and ink, line and wash, to fine architectural drawing with jewel-like colour, to watercolour landscapes, impressions in subtle washes and broad brush strokes. His handwritten captions show a skilful way with words, perhaps most readily seen in the names of his characters.

Constantly seeking to extend the boundaries of the cartoon medium, he wrote: "A picture, with the addition of writing, as part of the design could form a condensed short story. A series of pictures, varying in size, could be a miniature play. This provided the incentive to try and devise a new method of drawing, to allow a picture I had formed in my mind, to drop, as if by accident, on to the paper. In the way a musician plays an instrument, I would play the drawing". On humour he wrote: "I have discovered that the nearer humour approaches seriousness, the funnier it will be. Being funny is not funny. Humour is seriousness in disguise".

John Glashan was born in Glasgow and studied painting at Glasgow School of Art. He moved to London in the early 1950s to pursue a career as a portrait artist but found success as a cartoonist, illustrator and landscape painter. His work first appeared in Punch, Lilliput and Queen Magazine, and subsequently featured in a wide variety of publications including Private Eye, The New Yorker, Town & Country and Radio Times. He illustrated several books, exhibited and published collections of his work and was a founder member of the British Cartoonists' Association. In 1978 he created the Genius series for The Observer Magazine which ran for 5 years and won the Glen Grant Strip Cartoon Award in 1981.

In the 1990s, he continued to challenge and extend the boundaries of the cartoon medium with his work at The Spectator, combining architectural pen and ink drawings with watercolour landscapes. Peers Chamber, House of Lords is typical of the unique style he developed during this period and was amongst a number of images acquired for the Parliamentary Art Collection by the House of Lords Works of Art Committee for display in Milbank House as a part of the contemporary art collection.

Quote from the book cover of John Glashan's World.

The piece currently published on the British Cartoon Archive website is not approved or welcomed by John's family. We contacted the archive to ask for the inaccuracies and unsubstantiated conjecture to be corrected or removed, but nothing was done about it. 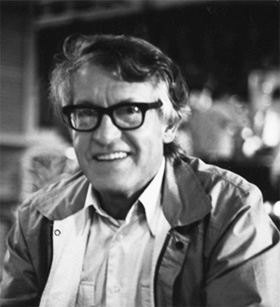 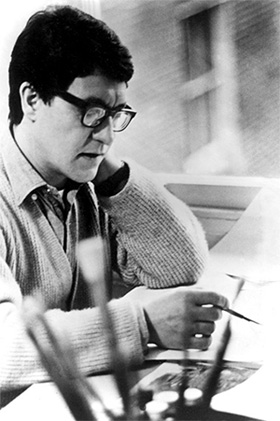 John Glashan in his studio